I hate to say I told you so 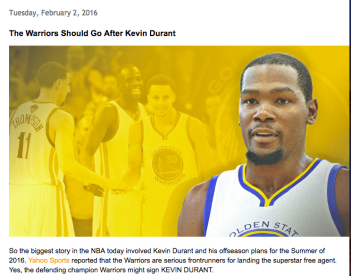 Ok, I can’t take all of the credit for the story. The Warriors had to beat the Thunder in the playoffs and then had to blow a 3-1 lead in the NBA Finals in order for this move to happen so I’ll share the credit with the players.

I said this on February 2nd and I will say it again. The Warriors should go after Kevin Durant.

I’m probably in the minority when I say this but I do not blame stars for wanting to play with other stars. Why should Kevin Durant stay in Oklahoma City when he feels that he has a better chance to win in Golden State? Kevin Durant gave everything he had to OKC, and now he’s hated? Why play with Russell Westbrook when you can play with Steph, Klay, and Draymond? Isn’t this a no brainer?

All I keep hearing is how Durant is soft and Durant is weak and blah blah blah. If KD went to your team, you would be CHEERING this move. Hypocritical fans at it again. I do not blame Kevin Durant whatsoever for leaving. There are only two reasons as to why you leave a team. You either get paid more or you increase your chances of winning. It’s no secret that Durant wants to win a title in order to add his name to the list of the greatest players of all time. If the Warriors give him that chance, then going to the Warriors was the right decision. As much as the front office gets praised in Oklahoma City, they should’ve seen this coming. OKC had a big 3 with Westbrook, Durant, and Harden but they traded The Beard away. They fired Durant’s friend / coach, Scott Brooks. Kevin Durant is Top 5 in the NBA, and yet it started to feel like Russell Westbrook’s team towards the end. Durant did not like his cards anymore so he decided to get new ones.

Don’t be mad at Durant. Be mad at the system.