After one of the most exciting regular seasons in recent memory. The NBA playoffs are finally here and after the grueling 82-game journey, 16 teams lare eft standing. The DMR returns with their annual breakdown of each first round matchup, with the first tipping off in Cleveland as the Cavs look to repeat as champions at 3 PM EST against the 7th seeded Pacers. When I think of the playoffs two things immediately come to mind, the epic NBA on NBC theme song and the Chicago Bulls – Boston Celtics first round playoff series back in 2009. If you haven’t seen it or forgot, check out those highlights and if this year’s Bulls-Celtics series comes anywhere close to that we are in for a treat.

LTS: Ahhh they meet again, memories of the 2009 epic match up I referenced in the introduction. I don’t think this series will be near that but the games should be closer than the usual #1 v #8 seed contests as the pair split each of the four contests with the home team as the victor. Jimmy Butler and Dwyane Wade will do enough to keep this close, but give me the overall better team with the more experienced coach in Brad Stevens. Isaiah Thomas leads the Celtics to victory.

DG: Everyone is going to call this the matchup with the biggest upset potential. I totally see why. The Bulls are clearly more experienced with guys like Rondo and Wade, who know what it takes to win a title. That being said, as a Knicks dan, it pains me to say this but I absolutely love what the Celtics have done these past couple of years. They are still a superstar away from unseating Cleveland at the top, but they’ll be just fine in this series. Plus, I have to root for my doppelgänger, Brad Stevens.

Not a Celtics fan, but always happy to see the guy who I will look like in 15 years. Thanks Brad Stevens pic.twitter.com/0mW3Y5iP1A

LTS: The defending champs come into the post-season not playing nearly their best basketball, as LeBron tries to frame the Cavs as the underdog #2 seed, looking to motivate his teammates and flip that switch to playing championship ball. Playoff LeBron is a treat as he reads The Godfather and shuts down social media, this will be a nice test for the Cavs but their talent is too much for Paul George and the Pacers.

DG: The question is not if the Cavs will lose series. The question is “how many games will they lose on the way to the finals?” They will definitely have to earn it this year as the East has gotten tougher. Lebron is still Lebron. This is so weird to say but the X –factor is Lance Stephenson. If Lance can get in Lebron’s head and blow in his ear, they can push this to 6 games.

LTS: The 6gods made some solid additions at the deadline in an attempt to be able to go toe-to-toe with the Cavs next round with P.J. Tucker and Serge Ibaka. As Lowry gets healthier, paired with DeRozan in the back court, that will overpower a Bucks team that plays without a true point-guard. This is a great chance for the world to see the Greek Freak in action, but give me the Raptors to advance.

DG: Very, very interesting series. No one besides the Warriors have a better record the last couple of weeks than the Raptors. I loved the Ibaka trade and they have been clicking ever since. Now with Lowry back, this team is dangerous. Credit to the Bucks for making the playoffs. This is a young, fun team with a future All-NBA 1st Teamer Greek Freek. If they can get another stud to pair with Giannis, they’ll be a staple in the playoffs for the next couple of years.

LTS: Scotty Brooks came over to Washington and proved his doubters like me wrong, propelling them to 49 wins, the 2nd best home record in the East, while turning John Wall into an MVP candidate. The Wizards are a dangerous team if they put it together this post-season, as their athleticism is the difference against a slower Hawks team. I’m pumped for a potential Wizards-Celtics 2nd round matchup.

DG: I’ll be honest. I’m not really interested in this series because I think the Wizards are going to sweep them. The Wizards were dead in the water at the beginning of the year. They figured it out and most notably, John Wall and Bradley Beal finally started to play. I wish I could write something better, but I just can’t lie to our loyal fans when I say this series is over. Wizards in 4…maybe 5.

LTS: I won’t waste your time selling this series. If Durant is healthy, the Warriors should really breeze through the Western Conference with no issue. Sorry Portland, sweep city.

DG: LTS and I are in agreement. I’m really trying to think and spew up some BS as to how the Blazers can make this a series, but I have a better chance at running for President. Warriors win the series after the opening tip in Game 1.

LTS: For the fourth time in seven years we get a Spurs-Grizzlies match up. Two teams that play tough, gritty, old-school basketball, which may not be appealing to some fans. After Chandler Parson robbed the Grizzlies of $94 million (sorry had to get that out there), Memphis split the seasons series 2-2, but the Spurs are healthy and Leonard is a bonafide superstar.

DG: This teams were made for each other. Move the ball, ground and pound, play good defense. Tony Allen missing is a huge blow because he would’ve guarded Kawhi. I still think the Grizzlies can grind a game or 2 out, but the Spurs are just too damn good…again. 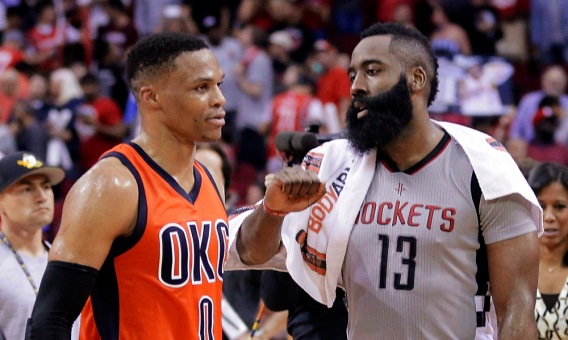 LTS: The battle of the MVP candidates. This should be a fun series with insane scoring numbers and stat-lines from two of the NBA’s best. In my opinion Harden should be the MVP, and his team gets it done in the intriguing match up. With more options to score the ball than the Thunder, especially off the bench that’s the difference in this series.

Rockets in 6 Harden For MVP.

DG: The MVP Winner vs. The Guy Who Should Win The MVP. This is the series that I will watch religiously. This is going to be fun or a huge letdown. Middle Man Dan at it again. Westbrook has had an unbelievable year, but I can’t stress this enough. Him and Harden’s number are practically identical. What Harden has done to propel the Rockets is a eye opening. I think Harden is coming out pissed off so the Thunder don’t stand a chance.

LTS: This will be the best series by far in the first round, as the Jazz look for their first post-season win since 2010. Something always seems to go wrong for the Clips in the playoffs so I wouldn’t be surprised if they get snakebitten again, but their talent and experience with home-court grade out well on paper. In what could be their last season together with this core, the Clips get it done.

DG: Since the Knicks make me drink and cry myself to sleep every night, I need a team to root for in the playoffs. Enter the Utah Jazz. I am hopping on the bandwagon. I’m going to be the biggest Jazz fan. Talk about a surprise, the Jazz have had an incredible year thanks to Rudy Gobert and future Boston Celtic, Gordon Hayward. I am not a Clippers guy. They should’ve blown this team up years ago. They always find an excuse as to why they don’t make it to the Conference Finals. Well this year, there will be no excuse so in a way, the Jazz are doing them a favor when they bounce the Clippers out of the first round. CP3 to the Knicks!