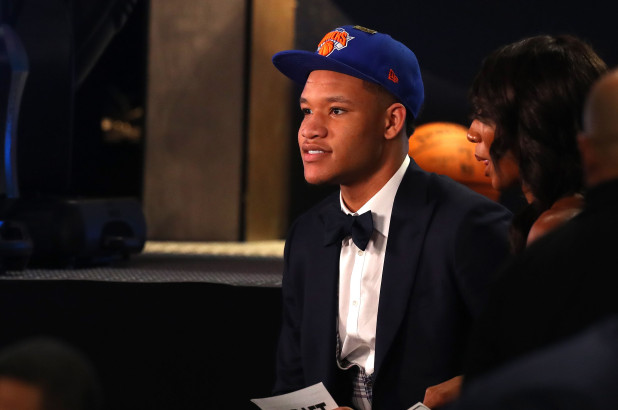 With the 9th pick in the 2018 NBA Draft, the New York Knicks select Kevin Knox.

Instant reaction: Solid, safe pick. Going into the draft, the Knicks were going to be selecting from a group of players that could fit in nicely with the system that David Fizdale is trying to run, which relies on strong defense and the ability to make 3s. My guess is that the Knicks would be selecting one of the following four players: Michael Porter Jr. Collin Sexton, Wendell Carter, and Kevin Knox. Carter and Sexton were picked before 9, and Porter Jr.’s medical sheet was worse than expected. So that left Kevin Knox as the last man standing, which is exactly who the Knicks selected.

Knicks Twitter seemed quite happy with the pick, but the crowd preferred Porter Jr. over Knox, which I can understand to an extent. Our NBA insider LordTreeSap was on the scene to capture the crowd reaction.

Knicks fans react to the selection of Kevin Knox instead of Michael Porter Jr. #NBADraft pic.twitter.com/3Qq1rhNp4S

Although the fans booed and chanted for MPJ, as I referenced above, Knicks Twitter and NBA Twitter in general seemed to like that pick (as did I).

I love the Kevin Knox pick for the Knicks. Great fit next to Kristaps Porzingis. Knicks fans will be cheering, not booing, once they actually watch him play in MSG.

On his television interview with ESPN after getting drafted, Kentucky's Kevin Knox says of getting booed by NYK fans: "I like that. That’s motivation. A lot of the city wants (Michael) Porter, but I’m ready to work, I’m ready to get to the organization and try to win some games.”

"They booed Porzingis and look where he's at now … They can chant 'Michael Porter' all they want, they got Kevin Knox"

The next Knick isn't worried about the fan reaction in Brooklyn pic.twitter.com/6fAel7U2dE

This is what you want in a Knicks draft pick. You want someone who doesn’t care about being booed. Just like Porzingis, you want a player who is willing to take the challenge and turn those boos into cheers. Kevin Knox is excited to be a Knick and I am happy to have him. The Knicks filled a need, which was a stretch 3/4 who could guard and play multiple positions. On a stacked Kentucky team, Knox became the go-to player down the stretch, winning the SEC co-Freshman of the Year with Collin Sexton. Knox can hit a consistent pull up jump shot. He’s long, athletic, and has not even hit his ceiling of what he can become as a player. I’m not saying Knox a franchise player, but I could see him scoring 15 PPG as a staple in the rotation these next two years. I LOVE the comparison to Jayson Tatum. Sometimes, the college game does not let you showcase your full arsenal of tricks because it’s a more team-oriented game. That was true for Tatum as he became the best player on the Celtics once Kyrie and Hayward went down. Will that happen with Knox? With Porzingis out for most of the season, Knox will get a chance to silence his critics.

Welcome to the squad, Kevin. Let’s get to work.