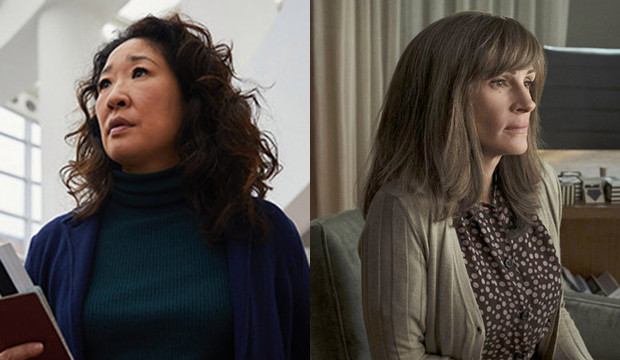 We are in the era of Peak TV. It seems that a new, critically acclaimed show debuts every week. It’s becoming a (good) problem because there are so many shows to watch and not enough hours in the day. With the emergence of Netflix, Amazon, and Hulu, movie stars are now dipping their toes into television. It’s a great time for television. This year’s field is very strong so predicting each category will be difficult, but I managed to pick out the winners.

Will The Americans finally be rewarded for being one of the best shows of the decade? Will the Hollywood Foreign Press Association (HFPA) continue their trend of rewarding new shows by crowning Homecoming or Killing Eve as the top dog? Unfortunately, for fans of The Americans, only 1 show has won best drama for their final season in the last 20 years and that was Breaking Bad. I’m going with a newcomer to win the award. The best show I saw this year was Killing Eve so that’s my selection, but I would not be shocked if Homecoming won instead.

Who Should Win: Killing Eve

Who Will Win: Killing Eve

I know what you’re thinking. Atlanta should be nominated. That being said, every show in this category could win and I wouldn’t bat an eyelash. For predictions, I tend to side with new shows so my vote would go to Barry, the dark comedy from Bill Hader about an assassin trying to become an actor. However, even though the last show to win back-to-back in this category occurred 8 years ago, I’m putting my money on The Marvelous Mrs. Maisel to continue its run of awards show domination with a second straight win in this category.

Who Should Win: Barry

Who Will Win: The Marvelous Mrs. Maisel

Best Television Limited Series or Motion Picture Made for Television

One thing that the HFPA loves is star power. I take that into account when predicting. Which of these shows has the most star power? Ryan Murphy is a staple in this category for American Horror Story and American Crime Story, but Versace did not have the big A-listers like Sharp Objects, which is my selection to win. Plus, HBO has won in this category 3 of the last 6 years. The HBO trend continues.

Who Should Win: Sharp Objects

Who Will Win: Sharp Objects

Best Performance by an Actor in a Television Series – Drama

Remember when I said it’s tough for final seasons to win the series awards? Well, the HFPA does reward individual actors for their final season. Just ask Bryan Cranston in Breaking Bad and Jon Hamm in Mad Men. My vote is for Stephan James in Homecoming, but this award is going to Matthew Rhys for his swan song in The Americans.

Who Should Win: Stephan James

Who Will Win: Matthew Rhys

Best Performance by an Actress in a Television Series – Drama

This category is murderer’s row. I’m praying on my hands and knees that Sandra Oh wins, but as I mentioned before, the Globes loves star power. Julia Roberts is going to win. (I liked Homecoming a lot. I liked Killing Eve a lot more.)

Who Should Win: Sandra Oh

Who Will Win: Julia Roberts

Best Performance by an Actor in a Television Series – Comedy

I have ZERO idea as to who is going to win this category. There’s a lot of star power among these five men. I have read multiple prediction articles and each author had a different winner. I loved both assassin shows this year so my vote is for Hader, but I believe my star power theory is relevant especially in this category so the biggest star in this category is… Michael Douglas.

Who Should Win: Bill Hader

Who Will Win: Michael Douglas

Best Performance by an Actress in a Television Series – Comedy

The Marvelous Mrs. Maisel is going to repeat its dominance again. The crowd pleasing show from Amazon will not only win best Comedy series, but its star, Rachel Brosnahan, will repeat as best actress.

Who Should Win: Rachel Brosnahan

Who Will Win: Rachel Brosnahan

Darren Criss won the Emmy in this category for his chilling performance as the killer Andrew Cunanan in American Crime Story. I’ve always liked Criss dating back to his days on Glee, but his stock has skyrocketed ever since this show aired. Criss should win, but do not sleep on Hugh Grant in A Very English Scandal.

Who Should Win: Darren Criss

Who Will Win: Darren Criss

It’s Amy Adams vs. Patricia Arquette. Full disclosure, I have yet to fully watch Escape at Dannemora, but from the clips I’ve seen and the reviews I’ve read, Arquette is phenomenal. That being said, once I saw the pilot episode of Sharp Objects, the race for this award was over. Amy Adams should win this award for one of the best performances of her career. Note: Regina King won the Emmy for this category so I wouldn’t count her out as well.

Who Should Win: Amy Adams

Who Will Win: Amy Adams

Best Performance by an Actor in a Supporting Role in a Series, Limited Series or a Motion Picture Made for Television

Side note: Why is supporting actor and actresses condensed into one category? If lead actor and lead actress are separated into drama and musical / comedy, then the same rules should apply for supporting. Anyway, there’s nothing to debate here. Henry Winkler is going to win for Barry. He’s great in Barry. Plus, the HFPA is not going to pass up their chance to see the Fonz onstage with gold in his hand. Ayyy.

Who Should Win: Henry Winkler

Who Will Win: Henry Winkler

Best Performance by an Actor in a Supporting Role in a Series, Limited Series or a Motion Picture Made for Television

In a perfect world, Yvonne Strahovski wins for her superb portrayal as Serena Waterford in The Handmaid’s Tale. That being said, there’s too much star power in this category to pass up. My bet is on Patricia Clarkson to win and wrap up a successful night for HBO.

Who Should Win: Yvonne Strahovski

Who Will Win: Patricia Clarkson