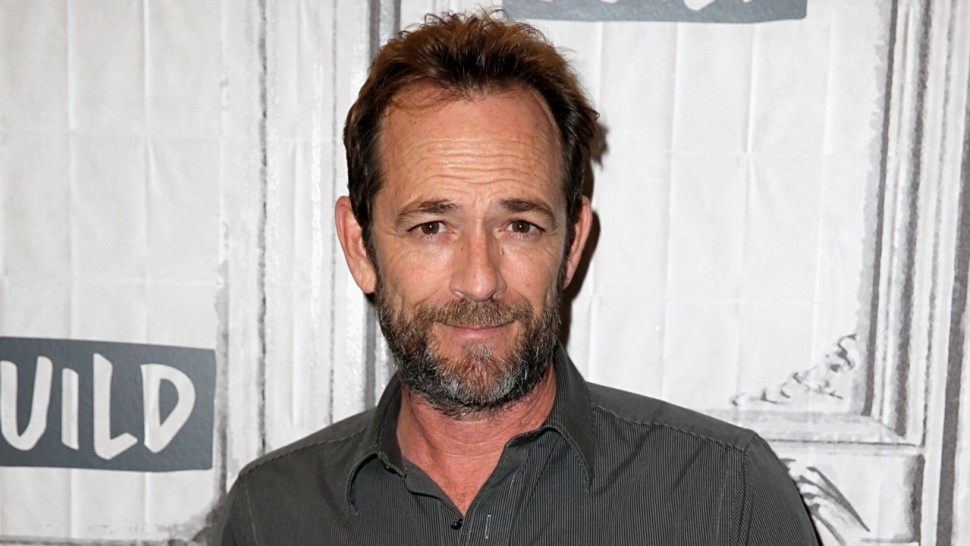 TMZ – Luke Perry — the TV icon and heartthrob who rose to fame on “Beverly Hills, 90210” — has died after suffering a massive stroke … TMZ has learned.

As we first reported, he was rushed to the hospital last Wednesday morning after suffering the stroke while at his Sherman Oaks, CA home. According to the emergency dispatch audio — obtained by TMZ — paramedics received a call for a stroke at the residence. We’re told when EMTs arrived, he was responsive and talking … but his condition deteriorated.

His reps said doctors had sedated Luke, hoping to give his brain a fighting chance to recover from the trauma of the stroke … but apparently, the damage was too extensive.

This is awful. Luke Perry has died at the age of 52 due to complications from a “massive” stroke suffered last week. Luke Perry was a teen icon during the 90s thanks to his role as Dylan McKay on Beverly Hills, 90210. I was too young to appreciate the show as a kid, but after watching reruns, you could tell that Perry was a rockstar. In fact, Perry’s Dylan McKay unfairly held him back from future roles because people could not see him playing any other character. He was that good. Recently, Perry was thriving in the role of Fred Andrews on Riverdale, which is an enjoyable show that I watch every week. The cast of Riverdale always discusses how much of a family they are so I know this loss in particular will hit home. From what I’ve read on Twitter, Luke Perry was an extremely nice and caring person, which in 2019, is so refreshing to hear. RIP Luke Perry. Thoughts and prayers to his family.

Luke Perry was a great actor and truly one of a kind. Watching him on 90210 was one of the reasons why I wanted to move to LA. Thinking of his family and friends on and off the set. Rest in peace.

I'm so sad about Luke Perry he was such a kind person. Enthusiastic and encouraging to everyone around him. ❤ #RIP

I saw Luke Perry at New York Comic Con. He was so nice to everyone and stayed back and talked to people and was cracking jokes. I’m so sad.

Luke Perry, you were such a good man. Damn. Love to his loved ones.

Crushed. Luke Perry was truly a great guy. Warm, kind, generous and hard working. We met very young, I witnessed the grace with which he became a pop icon & parent. He’s been an awesome example of how to stay decent in a swirl of crazy. Love to his family❤️ https://t.co/bGlTX8mNbB On July 18th, 2004 Entourage made its debut on HBO as fans had no idea what they were in for. 13 years later the series went on to last 9 seasons, 96 episodes and one box office movie to become a 21st century staple of HBO and a cult-classic series appealing to a widespread audience. I was actually late to the party, finally coming around to the gang in the winter of 2013, crushing season after season while on college break during my Junior year, which I feel was a blessing in disguise in a way. Instead of watching it as a teenager, I got to experience it all with a better understanding of life from a social and cultural standpoint as a young adult about to turn 21 and embark on the best journey of my life in Europe.

Whenever Entourage is brought up in conversation, all I can do is smile reminiscing on the hilarious experiences between a group of friends. We all could see our friends group a little bit in E (Suit), Vince, Drama, and Turtle, especially being from New York. Being in a celeb’s entourage in Los Angeles is something everyone secretly would die for in their 20’s, riding the coat-tails of a legend while still experiencing the fruits of the labor.

Thank you Doug Ellin and others who brought this show to life and into our living rooms as viewers felt connected to whatever the cast was going through. The cameos in Entourage are unmatched, from Kanye West to Marc Cuban, 50 Cent, Mike Tyson, Anna Faris and Andrew Dice Clay. This show had a little bit of everything that fans could attach themselves to within the Hollywood lifestyle. That’s why I feel it was so widely successful for a 30-minute per episode show. I would love to know how closely this is based on Mark Wahlberg’s life one day.

The character development was powerful as well, at the beginning most thought Vince would be the driving force of the group, but if you ask any fan of the show you will get a vast different number of answers as to favorite member of the cast. In my opinion I most related to Turtle in the group. I could totally see myself in his shoes as a member of an entourage, but Johnny Drama stole the show with his hysterical social cues and one-liners even in the most serious moments he brought comedic relief.

The amazing thing to me is that the cast really didn’t capitalize on the success as far as parlaying it into bigger acting gigs. Maybe directors felt they couldn’t be casted for other roles as they would always be associated with their Entourage characters. The love they still get all these years later is a joy to see. When I went to the Garden for two Knicks games this season, one Johnny Drama (Kevin Dillon) was sitting court-side and got a standing ovation. The same for later in the season when Turtle and Eric (Jerry Ferrara and Kevin Connolly) showed up to MSG receiving a bigger cheer from the crowd than anything the Knicks did that night.

It warms the heart to see the connection is still there for the cast like it was in the show, so many times fans have trouble separating real life from television roles. One day I’ll hopefully be able to sit down and watch this timeless show with my kids when they are of age and they can take the life lessons from Billy Walsh, Ari Gold, Sloan, Vince and the rest of the gang that I did when I was 20.

Harry Styles is an international superstar. If it’s even possible, he is going to soar past that and become a global icon at this rate.

So last night, Harry did Carpool Karaoke with my boy James Corden. Harry has been on the whole week with Corden, acting as a guest, doing skits, and performing every night. First of all, if you’re not watching James Corden yet, you’re doing it wrong. JC is without a doubt the best late night host in the game. He does everything well, which is so hard to do. He does a good monologue, GREAT skits, and he’s pure entertainment. I also love how he interviews everyone at once on the couch aka the British model. Thank you England for giving us Corden. If Colbert didn’t climb in the ratings like he has been doing, Corden would’ve slid into that 11:35 slot sooner rather than later.

Back to Styles. This segment was a home run because Harry came off as such a likable dude. Him and Corden had some serious chemistry and it would not shock me if they continue to collaborate in the future. I think of Harry as the cool older cousin you see at family parties. You’d do anything to sit around them. You try to act cool and impress them and when they acknowledge you and perhaps take you under their wing, it’s like winning the lottery.

I’m actually surprised at how relatively successful everyone has been since One Direction went on a hiatus. With Liam’s song release today, they have all put out music projects. My pick was always Harry to achieve the most fame. Harry’s album is probably going to go #1 and Sign of the Times has climbed rapidly climbed charts.

The scary part is I think he’s only touching the surface of how big and successful he can truly get. I’m actually super excited to see his acting debut in the new Christopher Nolan movie, Dunkirk, which comes out in July. Harry has a big supporting role so who knows. If he does well, he could be seeing some starring roles in his future and be the next Timberlake or Jared Leto.

See you at the top, Harry.

Our very last podcast of 2016 featuring the great Amanda Cesario live in studio. Female fans you are in luck. Enjoy.

Our very last episode of 2016. Thank you to all the listeners for rocking with us for the last 6 months. This edition was a goody, as we had out first female guest in studio with us, the great Amanda Cesario.

We covered a multitude of topics focused around the holiday season.Things got heated when LTS brings up his new phone background, which happened to be of someone he knew. Is that a weird move on his part? 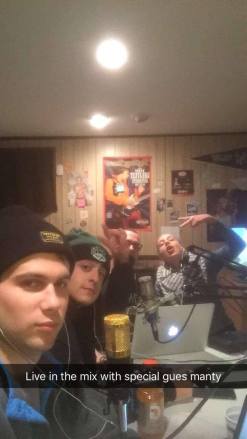 DG hits Mike and Amanda with our very first “In The Mix” speed round where he fired off some quick hitting questions like: crushes growing up, 3 dinner guests and favorite Yorktown bar/Pizza.

The edition concludes with some final thoughts on 2016, as we reflected on what the year meant to us and many of the craziest pop-culture stories of the year. We even dropped a few gems about how life can be beautiful at times even when you’re working hard hating how things are going.

Enjoy the episode. See everyone in next year. Be on the lookout for a revamped podcast come 2017.

Merry Christmas from the DMR.

CBS – Viewers around the country exploded into cheers after three lucky contestants spun a dollar during the Showcase Showdown on Monday on The Price Is Right.One after the other, the players stepped up to the famous Big Wheel for a chance at the $1,000 prize—and one after the other, they won. Not even host Drew Carey could recall another time three people have consecutively landed on the coveted $1 in the history of The Price Is Right!

The same three thoughts run through my head whenever I watch The Price Is Right.

1.Can this please be the show where they play Plinko?

2. Who is going to be the asshole that bets $1 more than their competition? The biggest DB move in the history of game shows.

3. Will there be a Double Showcase Winner?

Back to the three straight $1 winners on the Big Wheel. How? Ok, one made me feel good for the lady. Two made me say this is the luckiest thing ever. Three made me question if the Price Is Right is rigged. There’s NO way that could happen. What’s also underrated is the fact that each person landed on different numbers to make $1. That’s a smart move on CBS part. If they all landed on $1 on their first spin, then more people would think that the show is rigged. Sorry CBS, but I’m on to you! I will forgive CBS if they invite me on the show and let me play Plinko. That’s a fair trade.

By far, my favorite Price Is Right moment is when Aaron Paul got on the show. Jesse Pinkman in the flesh just professing his love for Bob Barker. I’m in a belly laugh watching this video. TWELVE HUNDRED BUCKS!